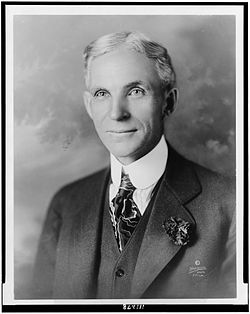 One of the names that started it all. As the fifth largest automaker the company founded by Henry Ford in 1903 has always been an American icon. After building his first automobile, called the quadricycle, in 1896 the Ford name continued to build upon the innovative ideas set forth by its creator.

It didn't stop there either. Thanks to Ford the modern idea of the assembly line was born and from it, countless innovations.

Today, we have the Mustang, the F-150, the Raptor and more. All thanks to the creative mind of Henry Ford.

At American Car Craft we believe in working on American cars. Our passion has always been with the American muscle car and we're proud to make parts for Ford vehicles and to be a genuine licensed manufacturer of Ford products.  A vote for Ford is as American as it gets. Ford creates something we can all aspire to, and even afford.